I'm With The Band

Boy started taking drum lessons when he was 7 years old. In what is clearly a mark of our good parenting, one of the first songs he learned was AC/DC's You Shook Me All Night Long.

I blame it all on musical genes -  not mine but Husband's, who has traveled all over the country to see his favorite bands play. Musical ability and appreciation runs in his family, big time.

A year ago, Boy and Girl decided to form a band; she would sing and he would play the drums. At their age, you're in a band because you say you are - so I didn't think anything would come of it. I was mistaken. In November, 2010 Boy invited two friends to join them and it became Official. Last October, their band auditioned with 8 other bands in their age division and made the finals. 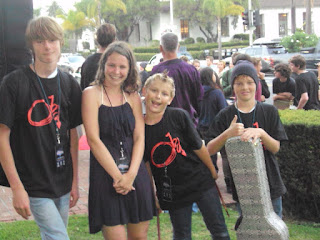 Although they didn't place for one of the cash prizes, I was completely unprepared for the emotional roller coaster of seeing my kids on stage playing to a sold out show. It blew my mind to see my daughter perform with such confidence and poise. Playing up a whole age group, my son rocked it hard and played better than some of the boys who were four years older than him.

There is no way I would have had the guts to do anything like that at their age, let alone now. Rock on - your mom is so very proud! \m/ \m/
Posted by Babydoll at 10:43 PM 1 comment: Links to this post

Email ThisBlogThis!Share to TwitterShare to FacebookShare to Pinterest
Labels: Music

Last night we were at Husband's holiday work party. I got a quick glimpse of a short, Asian man wearing a white jacket and sporting some impressive sideburns near the bar.

I thought he was an Elvis impersonator and excitedly thought, "This party is about to get interesting!" Turned out he was one of the waiters.
Posted by Babydoll at 12:02 PM No comments: Links to this post