Sunday was my half marathon. It was one of the best, most organized races of the dozen or so half marathons I've run. Disney has definitely got it down. I ran the whole thing despite feeling sick, being under-trained and pacing a 15-year old. 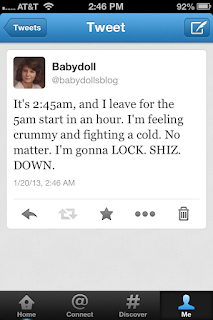 Actually, that last part was pretty impressive: I had mentioned in my previous post that one of Girl Doll's besties decided to run the race, with no training and only a 10k under her belt. She is a much faster runner than I am or ever was on my best day. I figured we would run the race - just not together. It wasn't until her mom told me that Bestie was not happy about being in different corrals that I realized she wanted to run with me.


I tried to smuggle her into my corral but it didn't work. I told her that I would wait for her, since our official chip time didn't begin until we crossed the start line. I explained that the pace would feel really slow, but to settle in and suggested she take water at each station. Although I know she can run a 7-minute mile, she stuck with me and paced herself well.

The race was amazing. We ran through Downtown Disney, California Adventure and Disneyland before hitting the streets of downtown Anaheim, CA. It was magic to see everything lit up at Disneyland, and run through all the places that we'd just been the day before visiting the park. Although we didn't stop, there were plenty of photo opportunities with characters along the route, ranging from Sleeping Beauty and Cinderella to Jack Sparrow.

So, yeah. I made a fair amount of smack talk about Tinker Bell but truthfully, she was a wonderful host. Running through the castle was a highlight of my half marathon career. At the end of Main Street was Tinker Bell herself, waving to each of us as we ran by...and I swear that she pointedly made eye contact with me. So, I have this to apologize for: 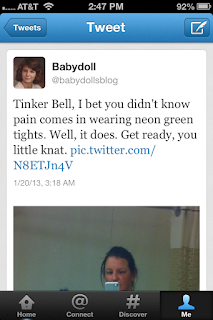 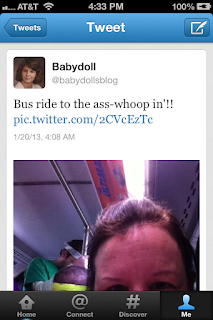 Just after mile 7, there was a water station and port-o-potties. I told Bestie that I had to use the potty and she said that she would walk ahead and drink her water. This is where we got separated.

Once outside the potty, I looked all over for her. I started running, figuring she was just ahead and considered calling her name as I went. I had assumed she would eventually take off and run on her own anyway; despite never doing any distance running, she is in excellent condition from basketball and can easily outrun me. I never found her until we all met up in the family reunion area. And I'll just say it right here: the first 7 miles with her was far more fun than the next 6 without.


So what do I get for all my bad-karma smack talking? Sick. Really, really sick. It's a similar version - although the more potent, wicked step-sister of the bronchitis I had about a month ago that includes chills, high fever, wracking cough and total fatigue. I should know better than to mess with a fairy.
Posted by Babydoll at 5:25 PM