It was a perfect Christmas in everyway, spent with friends and family.

Frosty welcomed us to our annual Swedish feast at my sister-in-law's house on Christmas Eve.

The only thing better than Christmas is...kittens! These aren't ours -- I know two cats that wouldn't appreciate them, as adorable as they are -- but they were fun to play with.

My adorable nephew is so shy...not! His fancy outfit fashioned from wrapping tissue morphed a half-dozen times throughout the evening - to the hilarity of everyone watching.

I'm horribly sentimental this time of year. Above all, I am grateful for my family and our friendships.

Our beautiful tree: I'm sure I say this every year, but this was the prettiest and most fragrant tree we've ever had.

I wanted one thing this year -- a book -- for Christmas. I came across a book of costumes used in the Star Wars movies at Costco. Being the trilogy nerd that I am, I freaked out and sent off a text to my daughter, asking for the book for Christmas. Naturally, I bought one for my bestie - because the awesomeness of this book for a fan is unparalleled.

I started to obsess about whether or not I should have just gone and bought a second book for myself. There were about a dozen books total...but if your Costco is anything like my Costco, finding an item after it is out of stock is an act of futility.

The hijinx and hilarity that ensued as a result of this message is too good not to share: 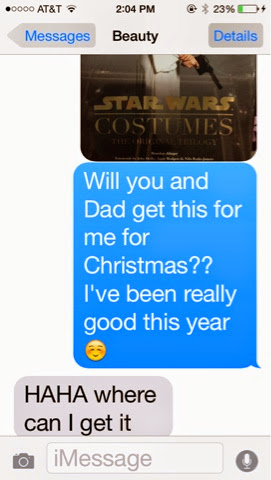 This is where it gets awesome; Girldoll thought the photo I sent was for a costume...not a book. Since he was operating from second-hand information, my husband was drinking the Kool-Aid, too. He didn't even question my logic; they both figured I wanted the costume to dress up for a race.

Mr. Doll was met with a blank stare when he asked an employee where he could find their Princess Leia costumes. He was batting zero and finally went back to the source, asking my daughter specifically where it was that I had seen the costume.

This is when Girldoll forwarded him the photo I had sent - and he figured out that what I wanted was a book about Star Wars costumes, not an actual costume.
I was in fits listening to Mr. Doll recount the story on Christmas morning.

I think everyone involved breathed a sigh of relief that I didn't intend to run a half marathon wearing a tiny metal bikini. Or worse yet...wear it around casually for cosplay:

I think we can all agree that I'm way past my slave girl days.
Posted by Babydoll at 3:35 PM 6 comments: Links to this post

When I was engaged to be married, my mother- and sister-in-laws to-be threw me a beautiful wedding shower. My sister-in-law had just gone to Sweden a few months before as an exchange student, and brought home a recipe for a cream fruit pie with an almond meal crust. She made the recipe for the wedding shower, and everyone raved about it; it was delicious as well as beautiful to look at.
I begin making that recipe for special occasions after my wedding. About 15 years ago, I ran across some small pastry cups imported from Europe. The pie crust was labor intensive...and everyone likes bite sized treats, so I adapted the recipe to make miniature desserts. It was such a hit that I have never made the dessert as a regular pie since.
Since they are cream-filled, it's not a dessert that you can bite into; you have to commit to eating it in one go. 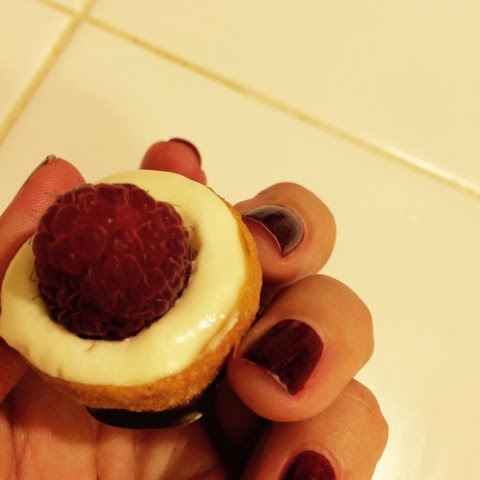 Why, yes...my nail color does coordinate perfectly with those berries. Thank you for noticing!
I have made this dessert dozens of times over. If I bring my dessert to a party, then you know it's for someone I really like. Years ago, my mom gave my signature dessert a nickname, for obvious reasons, that has stuck ever since. I give you...Swedish Nipples: 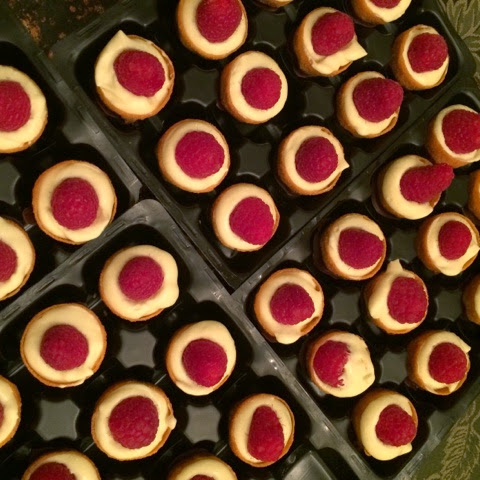 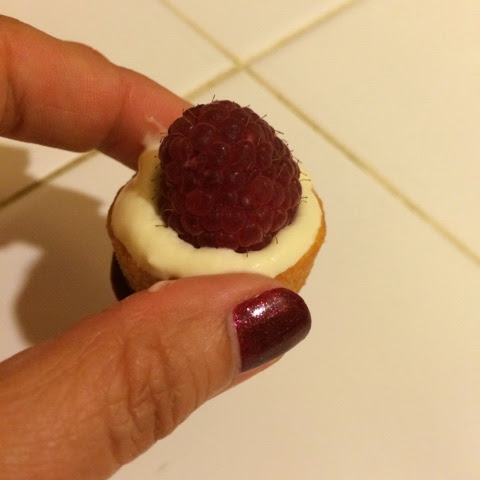 Do you have a special dessert or meal you're famous for? I'd love to hear about it!
Posted by Babydoll at 1:55 AM 1 comment: Links to this post

Email ThisBlogThis!Share to TwitterShare to FacebookShare to Pinterest
Labels: Foodie

5lbs Of Sugar In A 1lb Sack

If you have a generous bust like me, then you know my beef with sports bras in general. The best ones cost a fortune...but regardless of the cost, I always somehow feel like I'm wearing a bullet-proof vest. In desperate times, I have on more than one occasion worn two sports bras. I refer to this as 'double bagging'. I don't recommend it just for the chafe factor alone.

It's inevitable; it's time to do laundry and I'm down to my last clean sports bra. It's the one that every time I wear it, I swear to myself, "Never again! I am NEVER wearing this again."

But then I get desperate, and I think that this time it will be different. See, the bra goes on fine...but taking off the sports bra? That does not. The last time I wore it, I got stuck trying to get it off. I nearly had to cut the damn thing off my body.

Jah feel? If you don't, you can just play along and pretend you do. #thestruggleisreal
Posted by Babydoll at 1:07 PM 2 comments: Links to this post