Every June, our town celebrates the summer solstice with a parade that draws a crowd of approximately 75,000 people. I've always considered it a Southern California version of Mardi Gras, and it's one of my favorite events. 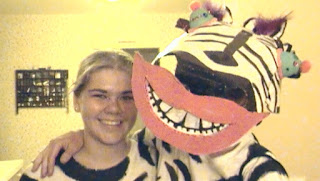 The parade coincides with a huge block party on our street, that includes a bounce house, beer garden, a smaller version of the parade along our street, talent show and DJ. This year, we had a party and invited many friends to come watch the debut of Girl and Boy's band in the block party talent show. This is a photo of two of my favorite people, who had participated in the parade downtown earlier in the day dressed as zebras. Excellent lips!

The theme for the parade changes every year, and one year my best friend and I decided to enter the parade. The theme was Circus, so naturally we decided on a flea circus as our entry. We created a miniature float that included a tight rope, trapeze and a ring of fire. We'd rehearsed our trapeze act that was both clever and a thing of beauty to witness. Her husband agreed to be our 'barker' and carry a megaphone, calling out the stunts that we fleas were about to perform, and Girl would be a butterfly in our show. She was 6-years old at the time.

The day before the parade, my best girl called in tears. She'd been sick earlier in the week and instead of getting better, she'd gotten worse. There was no way she'd be able to participate.

Instead of cancelling our entry, her husband stepped up and became the integral part of the act. He constructed a giant magnifying glass to 'wave' over the mini float to give the illusion that the flea circus was coming to life. He also made a megaphone and got totally into his role and shaved his head - just for the event. We'd made a 'ring of fire' out of a hula hoop and the colorful, curly shavings that come from shaping a skateboard wheel, and used a jump rope to represent the tight rope.

It took almost two hours to make our way up a dozen blocks, stopping every 25 feet to 'perform' for the crowd. Barker would call out one of two death-defying acts, Ring of Fire or Tight Rope - and I would complete each to the roar of the crowd.

Gentle readers, can I just tell you that this was far and away one if the best (and most physically demanding) times I've ever had? From one of the very first 'stunts', I took off flat out running and twisted my ankle. It was very hot that day, and mid-parade was a helpful Samaritan that was spraying parade participants down in an effort to cool us off. Barker got a full blast of water in the face and all the sunscreen on his freshly-shaven head poured into his eyes, blinding him for the next three blocks.

We were both ruined for days afterward, but it was well the effort - and it solidified my deep and profound love for Barker.
Posted by Babydoll at 1:18 PM

Email ThisBlogThis!Share to TwitterShare to FacebookShare to Pinterest
Labels: Entertainment