For my 40th birthday, I received a homemade card with a beautiful illustration of a chocolate lab from Girl. Our 14-year old chocolate lab died several years before, and everyone in my family was ready for another dog - except me. My fate was pretty much sealed.

Husband adores big dogs and males are typically bigger than females, so that's what he wanted. Girl and Boy wanted a puppy instead of an older dog. When we went to look at a litter, everyone was set on one of the two puppies in particular - the hyper, assertive pup that bowled Boy over and untied my shoelaces with his needle teeth. I'm no dog whisperer but an outgoing, confident pup quickly turns into a ninety-pound, leg-humping maniac.

I asserted that since this was my gift, I would have the final decision. I chose the other puppy that was friendly but a little quieter, with beautiful dark brown fur. I worried about having a male dog for several reasons - I was afraid of a male dog picking fights with other dogs and the constant marking on bushes and trees seemed like a total drag. I needn't have worried, though; Puppy had the sweetest nature without an aggressive bone in his body. 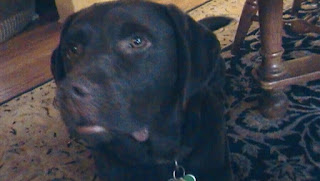 We have trained our dogs to pee and poop in one area of the backyard. It was a brilliant stroke on my part; it keeps the lawn nice and there are no bombs in the grass the step on. Once trained, however, Puppy would only potty there. We'd come back from a walk and he'd race to the side of the house to relieve himself.

We enrolled him into a puppy class for socialization and to learn basic obedience skills. From there, we progressed to an intermediate class that focused on heeling, sit and down stay and good manners. I asked the instructor why it was that Puppy had a 'shy' bladder and would only go at home. She said that dogs pee on things to mark their territory, and explained that Puppy was afraid to stake claim in someone else's area - just in case the dog was waiting around the corner to jump him. It took a year before Puppy would pee during walk. He'd cautiously squat and make a quick pee if he really, really had to go. As he got more confident, he would even poop.

Next month, Puppy will be three-years old. This whole time he's squatted to pee, like a girl dog - until today. Puppy lifted his back leg to pee just like the big dogs do - even though he was a little wobbily trying to balance on three legs.
Posted by Babydoll at 9:39 PM

Email ThisBlogThis!Share to TwitterShare to FacebookShare to Pinterest
Labels: Pets