Weekend Snapshots: Marching Band, Gizmo and What Couldn't Be Photographed

I'm trying to be gracious about it being Monday again, but it's not easy. Thank you to Erin at Her Heartland Soul and to Katie at Healthy Diva Life for hosting linkup links!

If you've been following along, then you know that I spoke at a 12-Step meeting on Friday night. It wasn't my best effort, but it also wasn't my worst. I kept remembering little details afterwards that I usually share to add more context and give my talk some continuity. It felt pretty rusty, which I could attribute to the fact that I haven't been the main speaker at a meeting for about 4 years. Also, my 19-year old daughter (!!!) was in the audience. I was so honored that she came home from college for the night to hear my talk. I don't have any photos to share, obviously, because it's important to protect the privacy of people in a meeting. People kind of freak if you start taking photos of the room with your phone.
This was one of the busier weekends on record, partly because I spent 12 hours on Saturday at Boydoll's marching band competition in Simi Valley. And despite the long day and the heat, I say this with all sincerity: this is the good stuff.

It's the good stuff, partly because I know how quickly these last few years with our son at home will pass by -- but also because there are few things better than watching my kids do what they love. People who don't know my son will ask if he plays a sport, and I always reply that he's a musician; marching band and drumline are his sport. It is enormously demanding physically with long hours spent rehearsing. All of which paid off at their competition, big time!

I'm not really sure where I pulled off the stamina, but Mr. Doll and I went to the beach with the dogs late Sunday morning. I love beachcombing, and collecting sea glass is one of my favorite pastimes. I have had terrible luck finding any glass lately, but a friend tells me that it can be pretty seasonal. I think hunting after a storm is the way to go, maybe?

Any beach day with our dogs includes bathing them as well, especially for our younger dog. He will roll at least dozen times until he is completely coated in sand. I didn't get any bathtime photos since I had my hands full, but I do have a Boomerang (that isn't loading) of an incredulous Spooky. She just can't believe any of it.

As if bathing two large dogs wasn't enough, I also cleaned Gizmo's cage. Although I don't know the sex, I think Gizmo might be a girl. Chameleons have been a fantasy pet of mine for about 10 years, and I find them absolutely fascinating to watch. I got Gizmo three months ago. She is a rudis chameleon and her breed is considered to be more of a decorative pet. Overhandling can stress them out, which leads to refusing food and hiding.

Although I prefer the plant in the photo above for her screened terrarium, it wasn't thriving and the leaves had trouble supporting Gizmo's weight. I replaced it with the original ficus that came in her enclosure. Admittedly, it has a better variety of branch sizes to keep her adorable mitten-shaped feet healthy. 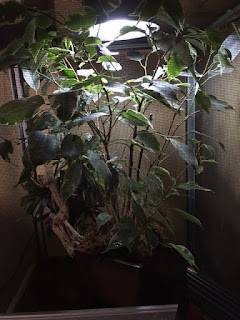 Camoflage is the name of the
chameleon game. Can you spot Gizmo?

Do you have critters? If not, what would be your fantasy pet?
Posted by Babydoll at 6:00 AM