Star Wars Half Marathon 2017: The Light Side

I ran the Star Wars half marathon in January for the second year in a row. You might recall the general bedlam of last years race: how I nearly missed the start of the race and my brush with the notorious 'balloon ladies'. I had wanted to run the 10k this year and pick up a third medal for running two consecutive days, but it was completely sold out. I should have purchased the Rebel Challenge packet when the race was first announced, but I was cranky and didn’t pull the trigger when registration opened. Oh well.

This year was more even fun than last year, if that’s even possible. I was in a much better headspace (read: I actually trained for this event) and I even planned an outfit.

The race coincidentally fell the same weekend that I needed to pick Girldoll up from the Long Beach port. It worked out to be a bonus because we got to spend the night at my SIL’s house and visit with my niece and nephew. The kids are always such good sports and came with me to pick up my packet at the Disneyland Hotel. The only hiccup was that I was supposed to pick Girldoll up at 10:30AM, but she wasn’t ready to go until well past noon. This ended up pushing everything back so that we didn't get to until a half hour before it closed. I had hoped to browse longer -- no one does an expo like Disney -- but time was too short.

Part of the problem was getting into Downtown Disney itself. Security was INSANE. In all the times I have been to Disneyland, I have never had to wait in any sort of security line to access the area surrounding the park. It is a sign of the times that security has become a necessity during travel or entering concert venues, but it definitely stole some of the magic visiting the resort. I’m not talking about a quick look inside backpacks, either. We were subjected to a full search of our belongings as well as being required to walk through a metal detector. Bummer, man. The only thing I could attribute the high security to was that Trump had just officially taken office as POTUS, and there were a lot of people in Los Angeles who weren’t happy about it. (You can count me as one of them. No surprise there.)

By the time we got to the Disneyland Hotel, we had barely enough time to grab my bib number and pick up my race t-shirt. I quickly bought some anti-chafe Glide from an expo vendor and we were on our way. It was probably the least amount of time or money I've ever spent at an expo. Girldoll and I treated the cousins to a late lunch, and then we enjoyed a nice evening with family.

Of course, I took an obligatory Flat Babydoll photo. It was so cute that my niece reminded me to post the photo on social media; she had remembered me talking about the phenomenon of laying out your race day clothes and taking a picture of your race bib and outfit. The stuff kids remember!

I got lots of compliments during the race on my excellent on the BB8 skirt I found on Etsy. Although there are all kinds of things that could go wrong running thirteen miles while wearing a knit beanie, I was totally fine.

The race was so much fun. 90% of the runners were wearing a costume or Star Wars themed embellishment. My personal favorite was a couple who dressed as Leia and Chewie wearing Belle and The Beast costumes. It was so meta! The spectators did not disappoint, either. 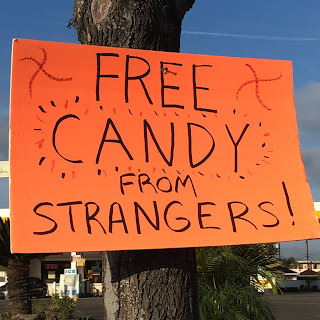 I decided I would live stream the half marathon on Facebook while I ran through Disneyland. I started in narrating my way through Tomorrow Land and filmed an epic lightsaber battle among cast members. I also caught some really fun footage of my hand as I high-fived a dozen Disney employees who had lined up along the course. I ran through Fantasyland and shared my favorite ride with Facebook (Storybook Land, in case you were curious) before the pièce de résistance: running through Sleeping Beauty’s castle.

After I crossed the drawbridge, I went to stop recording the video...only to discover I had never started recording in the first place.
I'll be honest: it took me the next mile to shake it off. For whatever reason, I fixated on my disappointment of not getting the video to work and had trouble letting it go. I'm charming that way.
Fortunately, we were hitting the streets of Anaheim and it was time for me to focus and get my game face on. Since the rest of the race is through business and residential areas before finishing at the Downtown Disney parking lots, sections of the race on the streets feel like it starts to drag. That is, until the cosplay spectators start lining the course. It is truly an incredible experience seeing all the elaborate costumes and props. 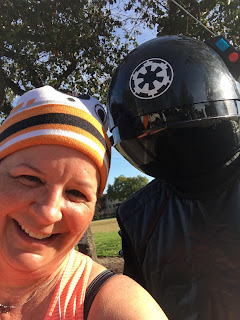 In addition to the half marathon next year, I really want to run the 10k for a chance to earn three medals. I know I said the same thing last year...but it's worth putting out to The Force, anyway.